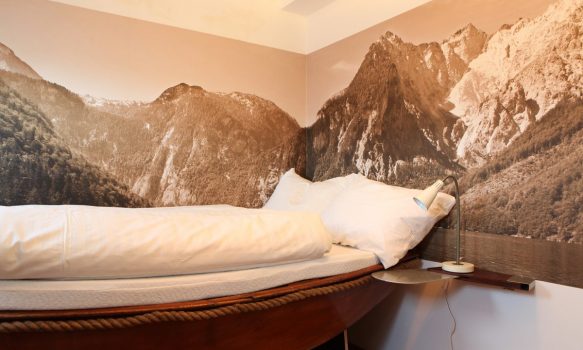 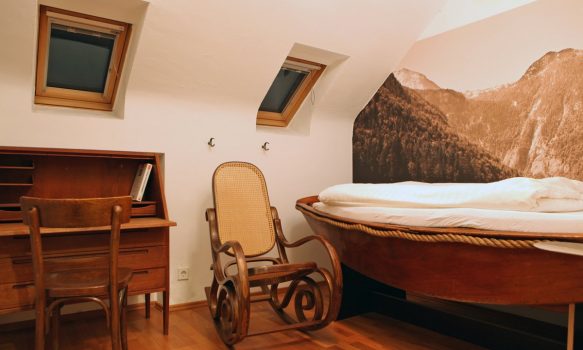 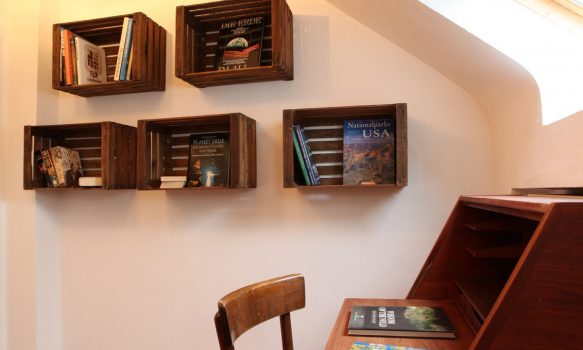 Tom’s room is our only single room, with an adventurous boat bed. Rent this room for €45 per night for one person and as a double room for cosy €52 (note: it can get a little crowded).

We provide a secure, complimentary baby bed, for children up to three years. Unfortunately, a regular extra bed cannot be provided.

Three years ago Tom’s life took a drastic turn when he, a frustrated Art director for the company “Schuemli & Partner” at the time, received a certified letter from Canada. His great-aunt Luise, who had been living by Lake Tagish near the border of Canada and Alaska for nearly 40 years, had past away. Two weeks later, being the only heir to his late aunt’s belongings,Tom decided to make the trip to Canada. Shortly after, he was informed about what he had inherited: the cabin at Lake Tagish, as well as a boat. Going back to “Schuemli & Partner” was now out of the question. The very next morning, he drove to the 100km distant city of Skagway (Alaska) and resigned via e-mail. A week later he set sale for the Bering sea, traveling through the Yukon river and arriving 5 months later, incredibly exhausted but unharmed.

Just three months later, he decided to take his boat and return to Europe. Tom wants to show the people “how to live the life, in smaller doses”. He now teaches rafting classes all over Europe. He also owns a small boat rental at a lake near Huerth (near Cologne). He only lives in his room in the Wohngemeinschaft during the winter months when it becomes unbearable to spend the nights outdoors. Tom modified his boat into a bed, as a normal bed would mean that he has turned his back on his new way of life. The only thing worse then sleeping in a normal bed, would be returning to his old, miserable life as an art director.