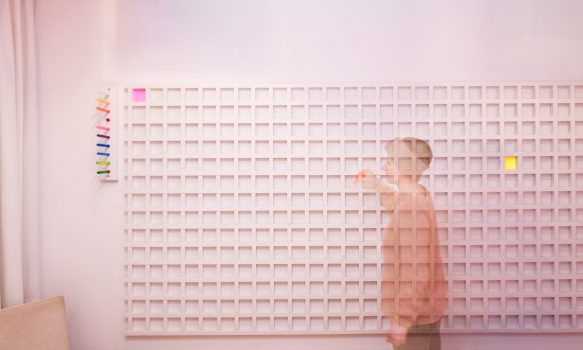 Ruben is furnished with a stylish double bed with an optional extra bed if needed. Clear forms and a fancy adjustable light installation make “Ruben” the perfect choice – and not only for design fans. Ruben’s cube room can be booked for two, starting at €59 per night or starting at €75 for three.

Ruben was raised by esoteric hippie parents, under strict anti-authoritarian guidelines, in the selfproclaimed autonomous neighborhood of Christiania in Copenhagen. When Ruben was two years old, his parents thought it best to send him to an anthroposophical kindergarten, where he was to learn the art of silk painting, making beeswax candles, learning the movements of eurythmics and self-evolution. But it turned out a little different than expected. In 8th grade, Ruben broke his flute at a charity concert, out of anger and disappointment about the newly built cornerless school building. This was the first of an ongoing rebellion against the architecture of curved shapes. In this, he would break free from the constraining hippie world of his parents. Ruben moved to a state school and became a proponent of modernism.

After high school, he got into the Bauhaus University in Weimar. He often participated in speedcube competitions to get by. He holds the world record in solving the Rubik’s Cube in 6.24 seconds! Out of lack of higher competition, Ruben turned to architecture. Inspired by the works of the famous architect, Adolf Loos, a pioneer of modernism, he began his own pamphlets with titles like “curves and crime” – unfortunately with little success. In a nutshell, Ruben hated curves. Perhaps this is why he has failed to find the “right woman” so far. He invites people from all over the world to participate in completing his piece of art („Ecken der Kunstpartizipation“) by choosing a suitable color for the different fields. However, Ruben rarely ever is present. Currently, he is working on the realisation of Adolf Loos’ piece, the ’Chicago Tribune Tower’, as a 1:10 model. It is meant to appear as a counterpoint to the architecture in Cologne that is particularly spoiling the cityscape.

You can find out more about which cookies we are using or switch them off in settings.