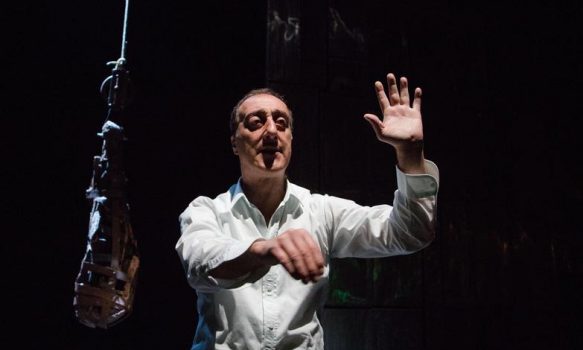 It is a story with dark and tormented outlines, with violently dramatic consequences that cannot be restored. For what Giuseppe Gulotta lived, protagonist of this story in spite of himself, but also for the experiences of the other various victims, addressing these events on stage is a great responsibility.

At the age of 18, Giuseppe Gulotta, a young construction worker with a life like many others, is arrested and forced to confess the murder of two policemen in “Alkamar”, small barracks in the province of Trapani. The crime hides an unspeakable mystery: secret services and statesmen who deal with neo-fascist groups, arms trafficking and drugs. In order to cover up the silence, any scapegoat would do. Gulotta lived 22 years locked up in jail for a crime he did not commit and 36 years of legal hell. He never escaped. He struggled head high, remaining there come un granello di sabbia (like grain of sand) in an infernal spiral until the obstinately sought and obtained revision process (the tenth one of a long series) when he was definitively rehabilitated.

However, it is mainly the responsibility of adapting the playwriting through the “human” story of Giuseppe (but also those of Salvatore and Carmine – the two victims of the massacre – or those of Giovanni, Vincenzo, Gaetano – the other designated scapegoats) to give justice to its personal dimension, that of a life nearly entirely taken away for dreadful reasons. The challenge is to trigger a process of identification, even without having been through what he has endured, without having experienced his suffering with an incredible sense of dignity and awareness. This performance tries to make this short circuit narrative avoiding any rhetorical intent.

Giuseppe’s voice attracts us in this vortex telling us, as if for the first time he has found someone willing to listen, the story of his interrupted youth, his arrest, torture, the guilty silences, the prejudices but also the unshakeable resolute hope in a final restitution of his own humble and high identity. He does it by alternating with secondary but necessary voices: an enlightened vice police commissioner also crushed by this mechanism, the police officer coordinating the actions of torture (an overturned, lucid and not at all tormented Kurz), his wife Michela, the parents. Every voice, every episode of the vortex, finds place within the light and oppressive scenography of Aldo Zuccho, capable of becoming multifaceted through its few but important signs. The original music of Luigi Polimeni, rhythmic and emotional counterpoint to the story, becomes dramaturgy itself, supporting the inexorable flow of the story in all its emotional scores.